TroutQuest's boats are 15ft in length, constructed from fibreglass and feature a shallow draft and 3 keels, meaning they are extremely stable, very safe, and can access the shallowest of water.

Use of Drogues
Our boats drift very well in light-moderate winds, but you may benefit from the use of a drogue in very windy conditions. In such conditions avoid fishing the areas highlighted above as hazardous for electric motors as you are likely to snag the bottom. Please also ensure that you carry a knife to cut the drogue cord in an emergency.

For traditional 'loch-style' fishing we generally drift with the boat side on to the wind, fishing directly downwind, and the drogue if we are using one, at the rear of the boat. Drogues with single cords should generally be attached to the centre mooring rope on the upwind side of the boat, but changing to the bow or stern ropes will change the angle of drift relative to the wind direction.

Adjustable drogues with two lines will generally reduce 'yaw', offering easier coverage of the water, particularly with 2 anglers. You can adjust the direction of drift by attaching these lines to the carabiners on the mooring ropes depending on which way you want to drift (see diagrams below). The boats generally tend to drift towards the stern (dependant also on distribution of load), so attaching the drogue to centre and bow lines can compensate for this.

If you move the centre mooring line to the other side of the boat, please ensure you replace it before securing the boat at the jetty.

Anchors
Anchors are provided in our boats as a safety measure and to secure the boats on the shoreline if, for any reason, you need to go ashore somewhere else other than at our moorings. We generally would advise not to anchor to fish as this will be less productive, and under no circumstances should the anchors be used as makeshift 'drogues'.

Moorings, Motors and Drogues
Sponsored by 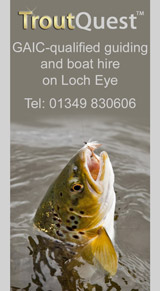